I’ve been a Star Wars fan since the age of five, I was that kid with bedroom walls plastered in posters, I even bought a star wars canvas australia way when we went on vacation there once; it was always my top priority. I’d spend most of my time quoting lines from the films too, so needless to say I’m pretty excited about this latest development. This is the sequel I’ve been waiting for since the end of 1983’s Return of the Jedi, long before Special Editions and prequels were even a thought. Oh now, I won’t hate on the prequels. Believe it or not, they have their merit. But, I’ve always been curious about the adventures of Luke Skywalker, Han Solo and Princess Leia – not the origin of a certain evil Sith Lord. Maybe director/co-writer J.J. Abrams (a longtime fan of The Force) felt the same way, which is why he reluctantly agreed to the daunting and highly scrutinized task of helming Star Wars: The Force Awakens, the seventh episode of the Star Wars saga.

In case you didn’t know (yes, there are still those who’ve never seen a Star Wars movie), it’s an epic saga that spawned the love of many things for myself and others – a love for movies, science fiction, fantasy-related stories and fandom. Personally, I’ve always considered the movies more space opera than science fiction, which puts to rest the ludicrous apples/oranges comparison to Star Trek. Yes, you can enjoy both. I played Star Wars on the playground in grade school (I can still do a mean Chewie impersonation), collected the Topps trading cards and Marvel comics and had the action figures and toys. Needless to say, the universe the George Lucas built means a lot to me.

So, what I’ve always wanted out of a new Star Wars movie was to recapture that sense of awe and wonder that captured my imagination from ages five to eleven. There were those moments in some of the three prequel movies, but overall, I just didn’t feel the same way. That’s bound to happen though, since people change and many have said that these movies are primarily for kids, but my enthusiasm for them hasn’t changed nor has my optimism. 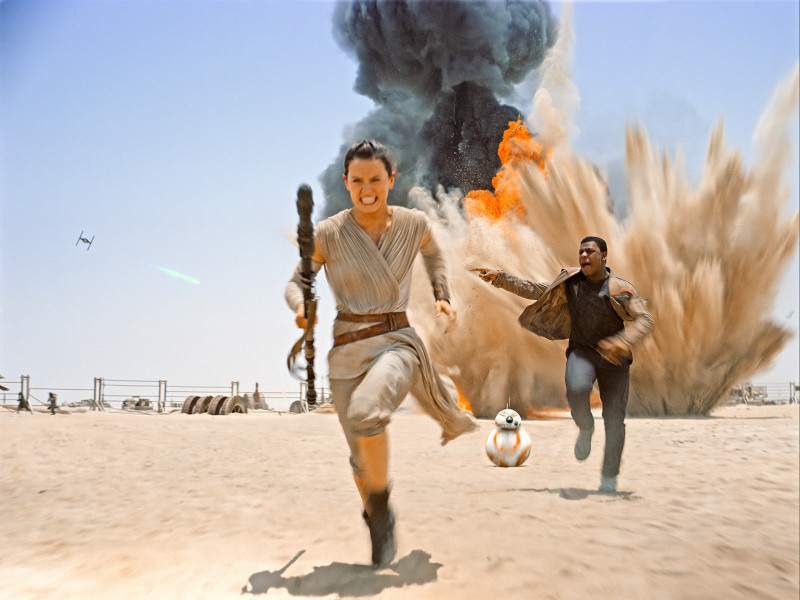 When Lucas sold his universe to Disney in 2012, that optimism increased. There was now a chance for other filmmakers to dabble in that galaxy far, far away. Lucasfilm had gone the way of Marvel and Pixar, still an intact entity, only backed by the immense bank of the House of Mouse. Not long after that announcement, producer Kathleen Kennedy, newly appointed overlord of all things Star Wars, tapped Abrams – who successfully rebooted the Star Trek movies, yet made it clear he was more of a Star Wars fan growing up – to kick off a new trilogy that would pick up thirty years after Jedi.

Anticipation replaced apprehension when screenwriter Lawrence Kasdan, co-writer of The Empire Strikes Back and Return of the Jedi (not to mention Raiders of the Lost Ark), joined Abrams – after Toy Story 3 writer Michael Arndt bowed out – to pen another chapter (there’s no “episode” in the title) and when it was announced that Harrison Ford, Carrie Fisher and Mark Hamill would reprise their iconic characters, that anticipation turned into excitement. Add to that the return of composer John Williams, the backbone of the entire series and it was obvious the stars were more aligned than they were at war.

Since all that was announced, I’ve witnessed Force Friday with stores swamped with merchandise tie-ins, the seemingly limitless promotions of The Force Awakens and fell in love with a new droid that I hadn’t even seen in context – until now.

Yes, I can say I’ve seen The Force Awakens and I can tell you it did reward me with that feeling of wonder again while at the same time providing me with emotions that come when reuniting with old friends. My imagination was indeed captured again, even though I’m well aware that certain characterizations and storytelling aspects of the OT (that’s original trilogy, folks) are referenced and revised. 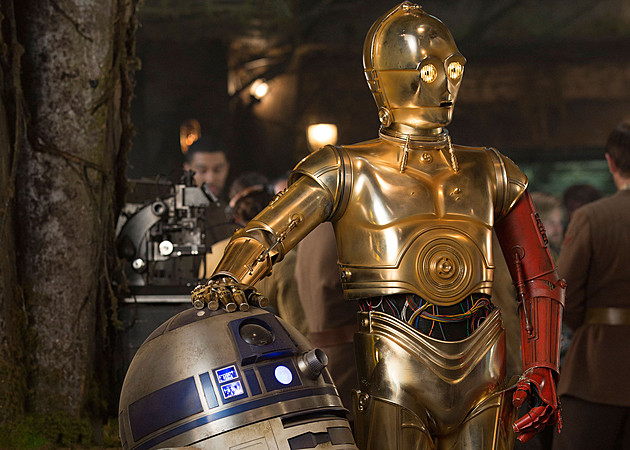 For some, the movie will seem like there was entirely too much build up and not enough payoff. I get that. This isn’t a perfect Star Wars movie nor is it the best, but after one viewing I can say I loved seeing what my favorite characters were up to thirty years later and – more importantly, since we have three more movies to go in this saga – I thoroughly enjoyed getting to know these new characters.

In case you do not have internet or have had Jedi-like will power over the past year, the three prominent new characters of The Force Awakens are Rey (Daisy Ridley), Finn (John Boyega “Attack the Block”) and Poe Dameron (Oscar Isaac). All three actors are excellent. Here’s what I feel I can say about them, since I’ve received multiple reminders from publicists to not reveal plot twists and keep my review spoiler free. An easy task, this is not.

Rey lives by herself, scavenging off the crash-landed carcass of an Imperial Star Destroyers on Jakku, a vast desert planet resembling Tatooine, only there’s no wretched hive of scum and villainy, just a lone outpost to trade in trinkets for food. Finn is a stormtrooper for the First Order (formerly the Galactic Empire) and his problem is he has a conscience and has a hard time with killing and destroying at the behest of ruthless General Hux (Domhnal Gleeson) of Starkiller Base – think bigger, more powerful than any Death Star – who works alongside Kylo Ren (Adam Driver), a volatile Dark Side disciple. Both of them report to Supreme Leader Snoke (Andy Serkis), a mysterious presence who appears in a familiar form. Poe Dameron, the most skilled pilot of the Resistance (formerly the Rebel Alliance) is on a mission to retrieve top-secret intel for General Leia Organa which can turn the tides of the Republic’s war against the First Order’s tyranny.

As in A New Hope, these three characters are brought together by a loyal droid. In this case, it’s another new character named BB-8, an adorable spherical astromech droid, who exudes undeniable personality in every frame. The droid encounters Rey and Finn on Jakku and in a matter of hours, all three are pursued by the First Order and find themselves aboard the Millennium Falcon, hooking up with a silver-haired Han Solo and an ageless Chewbacca (Peter Mayhew). Reluctant at first, our favorite scruffy-looking scoundrel agrees to assist the two young fugitives in their efforts to reconnect with the Resistance and prevent the First Order’s massive new weapon from becoming full operational. 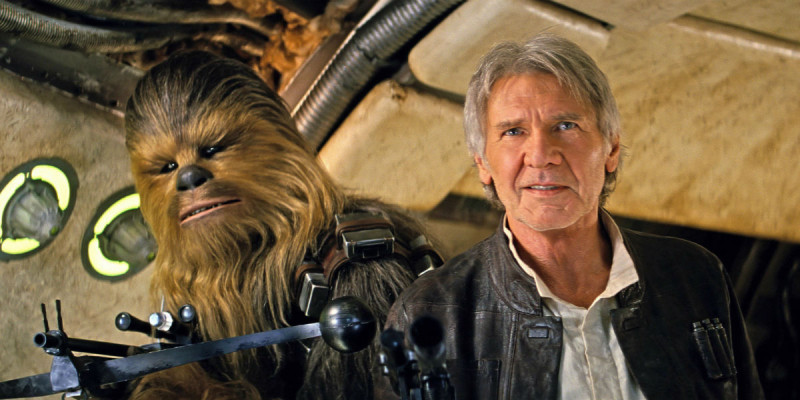 But, you may ask – as so many did in the trailers leading up to The Force Awakens – where is Luke Skywalker? Rest assured, he is felt throughout the entire movie and we do see him. In fact, it could be said that Skywalker is kind of the MacGuffin of the story. That’s all I’m going to say about that. What immediately surprised and delighted me about this Star Wars movie was its humorous dialogue, primarily delivered from the new characters. Sure, there are emotional stakes that are often quite overwhelming, but the dialogue received quite a few laughs from my shared audience – and yes, one of those lines was “I’ve got a bad feeling about this.” In a way, it kind of eases the nerves of any apprehensive fans and serves to remind viewers that this new trilogy is kicking off in the hands of a fan.

The overall story isn’t adding anything too unique to the saga, but it is revealingly character-driven, taking great care in establishing Rey, Finn and Poe, as well as providing the best characterization for Han Solo since The Empire Strikes Back. It becomes pretty clear why Ford agreed to come back. Han Solo plays quite a prominent role even though he’s a supporting character.

Ford, once the sardonic smuggler now conveys Solo as something of a host who connects these new young characters with the movie’s audience. It’s just as great to see him alongside Chewie again as it is interacting with Boyega and Ridley. He’s come a long way from not believing in an all-powerful Force that controls everything, to now confirming that “it’s true – all of it” to his new friends. When Solo says that line, it’s coming from a place we can relate to (especially if we’ve been around for the last thirty years) – a life that’s included good and bad decisions, regrets and unresolved loose ends. We especially notice this in the verbal and nonverbal interaction Han has with Leia here, which informs us what has transpired between them since Jedi. I definitely got choked up seeing Ford and Fisher together once again.

While there are certainly more complexities to be found in the good guys of The Force Awakens, Driver’s Kylo Ren is an exception amongst the Dark Side. Every other “bad guy” role left me either assuming there had to be an interesting backstory somewhere or there would be more to tell in the upcoming sequels, Captain Phasma (Gwendoline Christie) for example. Driver has a tough role and confidently delivers one of the more layered and compelling villains in the entire series.

As much as Abrams brings The Force Awakens back to a mostly practical visual effects look with great cinematography by Dan Mindel (who previously worked with the director on the last two Star Trek movies), there are a few moments where the screenplay tends to over-explain itself. One such moment is when insecure Threepio (Anthony Daniels) mentions he was probably unrecognizable due to his red arm. Oh, Threepio, we could tell it was you. (Of course, Kenny Baker as Artoo is here as well, but he spends most of the movie depressed.) To delve into another over-explainy moment – and there is a frustrating one – would veer into spoiler territory, so I’ll stop. These are gripes that in no way prevented me from enjoying the beginning of this new trilogy.

I haven’t touched on everything since it’s just my first viewing and I’m still taking it all in. I’ll definitely pick up on more when I see it again in theaters, which is not the desire I had after watching the prequels.

The Force Awakens is a wholly satisfying episode that returns us back to the tone and feel of the original trilogy while providing just enough surprises and newness to keep our optimism intact. That is, if we feel it and let it in.

This article also appears in slightly different form on Keeping It Reel.

About David J. Fowlie 6 Articles
David's first film review for Fanboy Planet was "The Spiderwick Chronicles" in 2008 and has been a Chicago-based editor/writer for the site ever since. In 2009, he founded Keeping It Reel, where he remains the editor-in-chief and main film reviewer. David continues to review movies and cover film festivals there, while maintaining his membership in the Chicago Film Critics Association. He also volunteers with The Hero Initiative yearly to give back to the comic book creators that have and continue to inspire him.