You all know Star Wars: The Force Awakens opens this week. With it has come a ton of marketing and consumer cross-overs. Sure, people claim exhaustion with it, but they’re still buying. At least retail giant Target has combined their capitalism with the sense of community that Star Wars really has engendered, and offered their #sharetheforce campaign. The company launched a digital online archive for people to share their memories of what Star Wars meant to them, and still means to them.

That’s the beauty of online avenues like social media, and the wide array of platforms that you can use to share your favorite moments. There is no place quite like it. You get the opportunity to mix with people from all walks of life, and if you decide to find new hashtags for your posts, your content will be seen by even more people. How exciting is that? Social media can open to your eyes to a whole new universe, and when it comes to connecting and interacting with people who have similar interests in Star Wars as you do, then that’s even better.

On Sunday, a few days before the latest movie in the franchise opens, Target teamed with Disney and Lucasfilm to set up the “Target and Star Wars Galactic Experience” at L.A. Live, the massive downtown Los Angeles entertainment complex that includes the Staples Center and the Los Angeles Convention Center (where we’ll be returning in March for WonderCon). The exhibit was open on Saturday and Sunday, with a variety of interactive experiences and, yes, the opportunities to both be part of the community and buy a little swag.

The event also had a good cross-over audience with L.A. Live’s outdoor ice skating rink and Disney’s Frozen On Ice performing at the Staples Center right next door. Sure, you could see plenty of little stormtroopers, Reys, and Leias, but also more than a few Annas, Elsas, and Olafs waiting in line to help build a giant First Order Tie Fighter out of Legos.

But first… the many, many photo opportunities with characters. R2-D2, Darth Vader, Stormtroopers, Boba Fett, and anonymous Tie Fighter Pilots, Royal Guards, and Jedi Knights appeared throughout the event. If you added any photos to social media and used #sharetheforce, you could print it out right there and Target team members would add it to a collage that formed a Star Wars mural.

Before you could lose yourself in sharing The Force, Target had a helpful reminder: 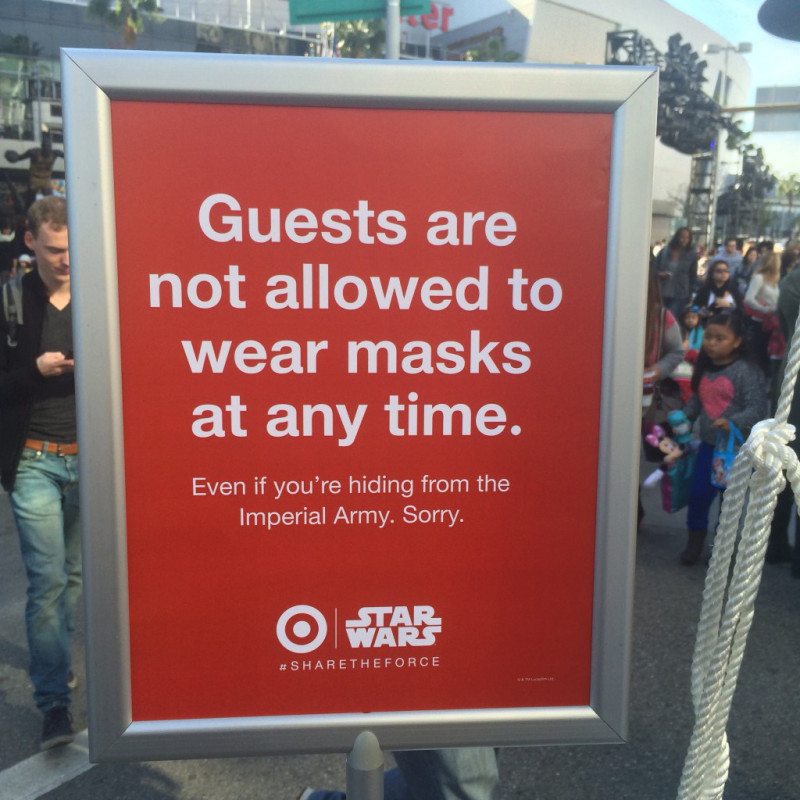 We are living in a weird time for Star Wars fans — as anyone drooling over The Force Awakens knows, it would be hiding from the First Order. As long as Darth Vader looms, however, we are in the shadow of the Empire. (Even if Shadow of the Empire is no longer canon.)

Stepping further away from the street and into the crowd, the Galactic Experience featured a series of domes, each with a unique experience for fans — though, admittedly, some of those experiences can be conveniently recreated at home with various books and toys, but… it’s not as much fun as being surrounded by people who are just as excited as you are.

The Galactic History Dome hosted an exhibit from Rancho Obi-Wan, the Northern California Star Wars museum, that will also be bringing an exhibit to Silicon Valley Comic Con in March. 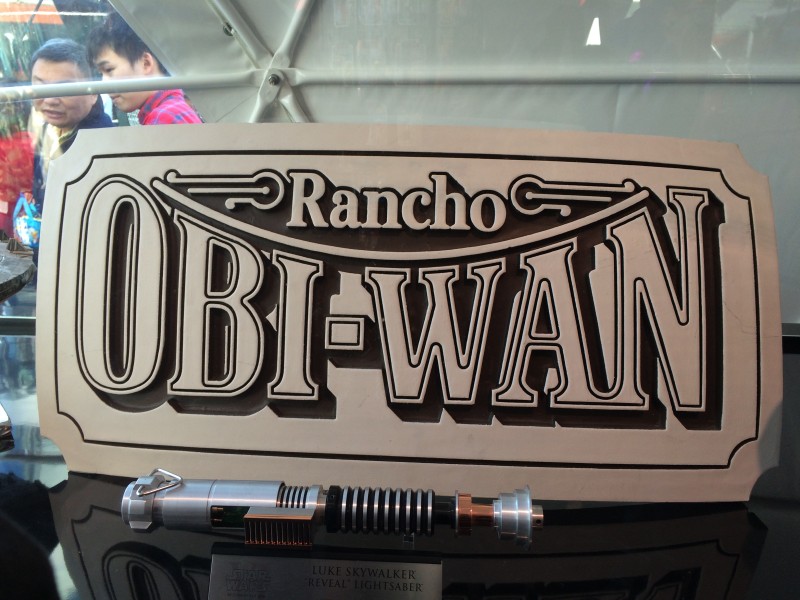 The dome was filled with art and artifacts, props and prop replicas, and startlingly convincing Jake Lloyd and Boba Fett statues. It is a celebration of Star Wars in itself, with pieces testifying to the films’ influence and inspiration. Plus there was a cool pillar of action figures in their original packaging. If Boba Fett was in his card display, no, he does not have a firing rocket pack on his back. But we can dream.

Even further back, there were crafts for the kids. For several years now, Star Wars origami has been popular, and Target set up folding stations in “the Origami Building.” Not a full-fledged dome, the Building was really an open air canopy. The options seemed endless, and the line to sit down and do create a paper Darth Vader helmet or starfighter was pretty long.

Of course, if you’re doing Star Wars crafts, can LEGO be far behind? Even in a galaxy far, far away, that’s a rhetorical question. Target set up the LEGO Master Builders Dome, with Master Builders (people who are actually paid to create huge Lego statues and replicas) on site creating a First Order TIE Fighter — but out of components that attendees assembled. Sit down at a table, put some bricks together, and then contribute them to one of three color-coded tubs in front of the Master Builder.

If you walk into a Target store (or any toy store, really), you may have noticed the line of Amazon that utilize EEG devices and tablets to move objects “telepathically.” The “Use the Force” dome at this Experience allowed attendees to don a Jedi robe, put on a Force Trainer headset, and try to race spheres around a Jakku landscape in order to reach BB-8. While the home toys do not offer quite the same immersive experience, it is an excuse to don your Jedi robe for days other than December 18.

In between all the domes, Target had set out canopied areas for people to rest, reflect, and consider whether they were going to buy an exclusive t-shirt. These areas all had plexiglass-topped round tables filled with action figures. The effect was cool. Would one of these fit in your living room as a great conversation piece?

The last dome featured the “Galaxy Show,” an immersive projection that had attendees lie down and look at the stars. Constellations whizzed by, most forming very familiar faces, as occasionally X-Wings and TIE Fighters whizzed overhead and engaged in battle. Everyone got a wrist band that would light up in response to some of the sound effects, and in the aftermath, still does with any strong vibration.

Some of it may seem cheesy to you, but to the generations (no exaggeration here) gathered to share this with each other, it was just… fun. Families gathered, excited to see R2-D2, participate in a LEGO build, and see a star show… it may not exactly have been what George Lucas envisioned decades ago, but it’s a pretty great result.

The only down side to this free event was that at present, Target has no plans to take it around to other venues in other cities. However, Rancho Obi-Wan does exhibit at various conventions, as mentioned above.

You know, this sign even made me feel nostalgic: 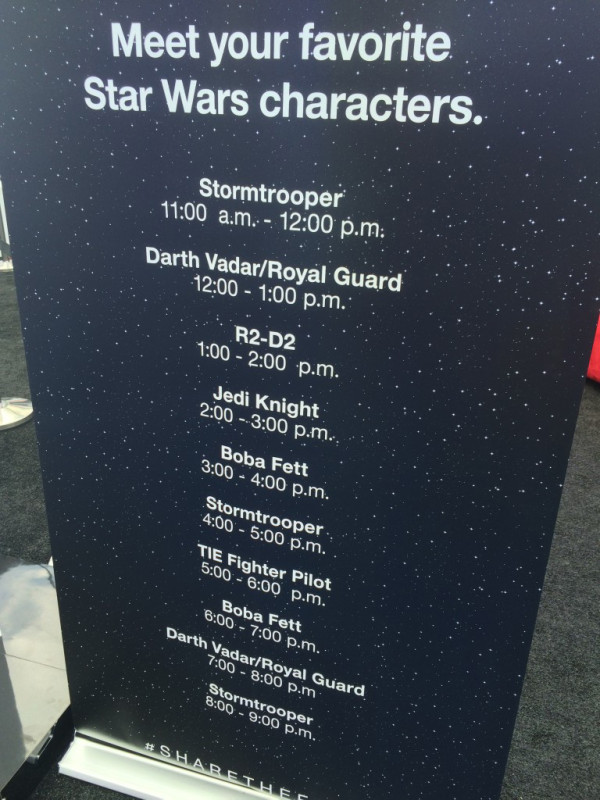 Right after the first movie came out, one of the few t-shirts you could buy (and thus, one of the most ubiquitous) said “Darth Vadar Lives.” So maybe he’s Darth Vader’s more publicity hungry brother. It’s kind of comforting to see that typo last through the years.

So as the hype peaks this week, remember… the Force is with you. Always.