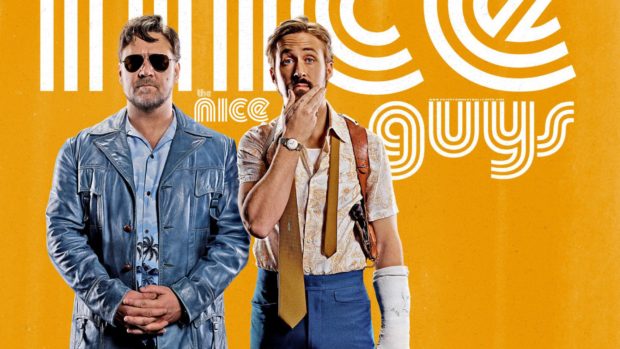 If Abbott and Costello had made a gritty 70s action film, it might have looked something like The Nice Guys. In Shane Black’s new throwback, Russell Crowe and Ryan Gosling capture the rhythms of the comedy duo, but that doesn’t undercut either the seriousness or the violence of the story. Instead, it makes a pretty good case for this movie to be a surprise hit, and an R-rated one at that.

Capturing the unhealthiness — atmospherically and perhaps spiritually — of L.A. in  1978, The Nice Guys makes it clear it’s not about being nice from the first scene. And yet it’s also about how small acts can hold back the tide a bit. A car crashes through a family home; investigating, a young boy discovers the naked dying body of the adult film star he’d just been ogling in his dad’s gentleman’s magazine. His first reaction is to give her the shirt off his back so that she might have just a little dignity in death.

That death has repercussions — or at least headlines — in a dark, smoggy Los Angeles. How it ties in to the fates of thuggish Jackson Healy (Crowe) and inept private detective Holland March (Ryan Gosling) takes a while to develop. Healy beats up people for money; usually they deserve it. The ethereal Amelia (Margaret Qualley) pays Healy to scare off March, which he does with brutal efficiency. And yet Healy has a soft side that is strangely sparked by March’s daughter Holly (Angourie Rice). We never get too deep into Healy’s background, but there’s pain there, and a sense of loss. What backstory Black gives us is just enough. 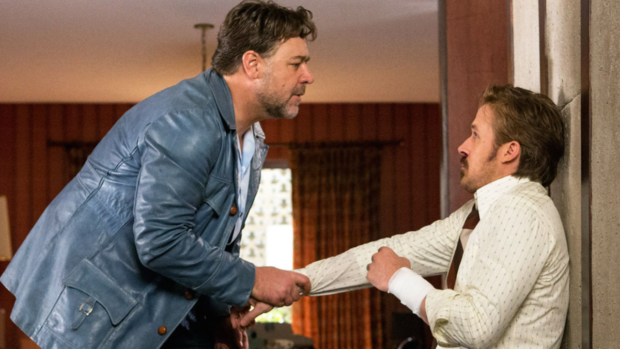 Eventually both men realize that Amelia may be more important than they thought, and so they reluctantly team up to find her. Their journey takes them down the rabbit hole (with Holly sneaking along), into a world where there are no happy endings. Evading sleaze peddlers and hitmen, the plot borrows a bit from the frameworks of Chinatown and Who Framed Roger Rabbit?; this is an entertaining trip into fictionalized real history.

Black, co-writing with Anthony Bagarozzi, pulls no punches in his portrayal (not quite a love letter) to this Los Angeles. Sure, it’s alluring, and it’s obvious many people don’t want to look past the glitz. Early on, the film reminds us that America’s family at the time was The Waltons, which Black will later turn on its head.

He also pulls an understated performance from Crowe, whose character in another context would be flat-out scary. There is a moral ambiguity to Healy, and he’s reluctant to be saved in the City of Angels. He plays a good straight man to Gosling, and the slow build of their friendship is a pleasure to watch. 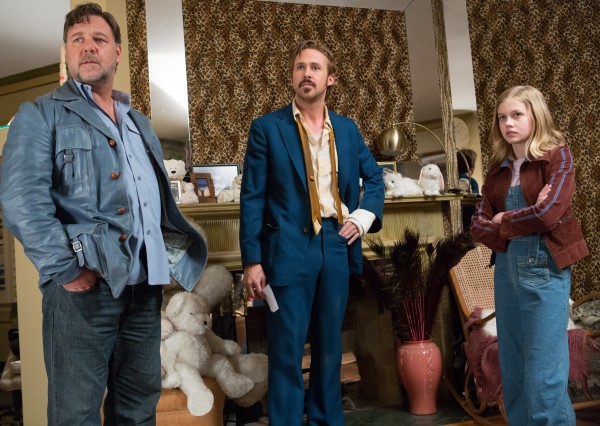 The supporting cast are all strong, including Gil Gerard getting a long overdue turn in a big summer movie. It’s nice to see Kim Basinger doing a dramatic role, and if Qualley doesn’t get to show much range, it’s unfortunately the nature of the role. The biggest impact comes from Rice, a child actor who’s going to be one to watch if she sticks with it.