Back in early 2015, Marvel fans got excited when ABC announced that they planned to develop a comedy set in the Marvel Universe: Damage Control. Based on a concept created by the late, great Dwayne McDuffie, Damage Control was about the team that came in and cleaned up after the superhero battles. You’ve got to assume that The Avengers went right for the shwarma after the Battle of New York; Thor didn’t whip up a cleansing rainstorm that took care of all that debris.

The few published Damage Control comics are beloved by fans, and though the team of blue collar workers might not have been able to sustain a regular comics series, it did seem perfect for a sitcom setting. NBC and Warner Brothers must have thought so, too — Powerless, set in the DC Universe, originally seemed a lot closer to Damage Control than the version that made it to air last month. 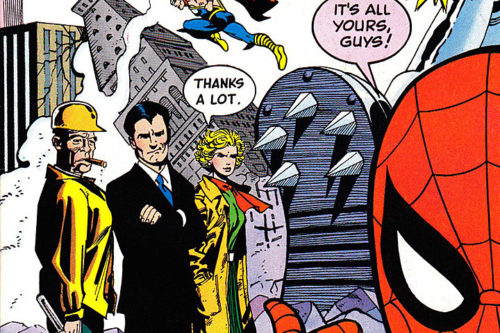 After that first announcement, ABC and Marvel Television kind of stopped talking about Damage Control. Instead, they focused on Marvel’s Most Wanted (which didn’t get picked up), Freeform’s Cloak and Dagger, and Hulu’s Runaways. And now ABC is moving forward with Marvel’s Inhumans, which had been originally announced as a film.

Today’s release of the trailer for Spider-Man: Homecoming thickens the plot. As story details emerge, it turns out that Michael Keaton’s Adrian Tombes started a business in the wake of the Battle of New York… cleaning up after superhero/supervillain battles. Sounds a lot like Damage Control, doesn’t it? His business takes a tumble when Tony Stark backs a government organization to do much the same thing, and if the chiron underneath him on a television screen can be interpreted correctly, it’s called “Damage Control.”

So what happened? Certainly, the blueprint for the Marvel Cinematic Universe can’t be completely set in stone; stories (and film line-ups) have to evolve as elements resonate or something proves unexpectedly popular. Originally, that was the reason for Inhumans to have moved back in the movie roster, because Ant-Man needed to have its sequel Ant-Man and the Wasp fast-tracked. When Marvel’s Agents of S.H.I.E.L.D. introduced the concept of the Inhumans, they didn’t touch upon any of the familiar royal family, and so we all just assumed that the show was just establishing Terrigenesis, which ultimately is only vague backstory for Black Bolt, Medusa, et al.

But as has also been noted, what happens in the movies affects the television show, but not vice versa. Since 2015, something else happened — Marvel Studios (movies) and Marvel Television (television) separated. Studio head Kevin Feige used to answer to Marvel CEO Ike Perlmutter, just as Head of Marvel Television Jeph Loeb does. However it went down (and we won’t get the tell-all book for at least another five years), Marvel Studios now answers to the Walt Disney Studios.

Right or wrong, Marvel doesn’t have the division of concepts that DC does with Warner Brothers. Two different Flashes can exist, one on TV and one on film, because they’re parallel universes. I hated that concept initially, but now… here’s the problem: Marvel started out saying “it’s all connected,” which was fine when one person was in charge. Now the kids are fighting over the toys. If there was any serious development on Damage Control as a television series, it’s not going on now. In exchange, Inhumans is being developed by the same guy who developed Iron Fist, which itself was a mixed bag, rushed so that Marvel Television could get to The Defenders before the next Avengers movie. TV has its super-team, too, you guys!

I’d like to believe that Loeb and Feige are still on more than cordial terms, and that this summer’s D23 Disney Expo will feature both men announcing a ton of cool stuff that weaves the two divisions a little more tightly together. We know that we don’t know much about Phase 4 of the Marvel Cinematic Universe — basically, what comes after Thanos and Avengers: Infinity War. It’s been a long time since Nick Fury or Sif showed up on television; it’s time for the two studios to do a little damage control of their own. It’s better when everybody puts their differences aside to put out a good product — FX’s Legion, a co-production of Fox and Marvel Television, proves it.