Everyone knows how you’re supposed to hold your hand while shooting webs. While in line for “Web Slingers: A Spider-Man Adventure” at Disney’s new Avengers Campus in Anaheim, I saw kids from age 2 to my age (considerably more than 2) assuming the pose. We all knew how to thwip. Admittedly, this attraction functions much like a strenuous version of “Toy Story Midway Mania,” using technology a cut or three above XBox Kinect. But there’s still something to be said for not just getting to pretend you’re webslinging — you’re seeing the results.

Thankfully, Peter Parker (Tom Holland) knows how to contact Spider-Man, and can put you in an experimental vehicle that will allow you to help Spidey fight the rogue bots. The more you swing and sling, the higher your score. Not that Spider-Man is necessarily keeping track. He just wants to stay alive as you capture spider-bots throughout the rest of the simulated Avengers Campus, including the building that won’t be ready to enter in reality for a year or so out. There’s even a brief sequence in one of the Collector’s warehouses. 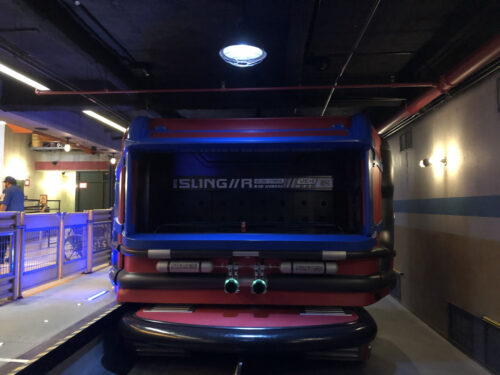 On the way to this adventure, Imagineers have done more than tease that looming Avengers HQ. They’ve included other storytelling directions to go, though there might not be room in California right now. Peter isn’t the only young genius involved — not even the only one we’ve seen in live-action before. The queue takes guests past informational posters featuring other contributors to W.E.B., starting with Onome, a young Wakandan exchange scientist. Then from Iron Man 3 and Avengers: Endgame, Harley Keener (Ty Simpkins) has found a place under the sponsorship of “The Mechanic” (Tony Stark), who in theme park continuity is still alive.

The third info-poster features a character about to make an animated series debut on Disney+, Lunella Lafayette. Better known in comics as Moon Girl, Lunella has almost superhuman intelligence, and makes a good fit for a Disney theme park. Her crimefighting partner Devil Dinosaur shows up in a few easter eggs. Doreen Green appears as well, though the main nod to her alter ego Squirrel Girl is that she’s a “squirrel whisperer.”

Because of the current reduced capacity as Disney slowly increases park attendance, once you’re in the indoor exposition with a holographic Tom Holland, it’s hard to stop and appreciate all the little detail packed in. Guests hurry past bulletin boards and lockers in the rush to capture spider-bots, so may miss that Lunella does pal around with Devil Dinosaur (if we can have a walking Baby Groot, Disney can top Universal Studios with their own crimson T-Rex).

And though Miles Morales may have sticky rights issues between Disney and Sony, his presence is felt in this attraction. 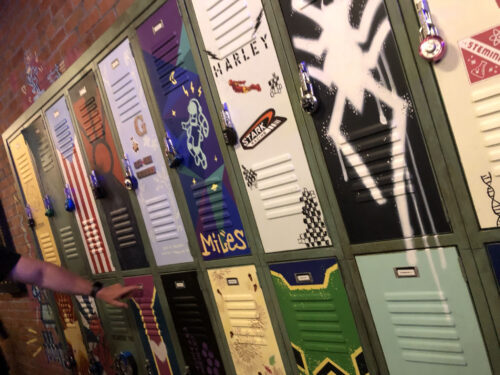 The only thing that’s unclear is if the souvenir webshooters actually improve the experience as advertised. Yes, they’re fun. Yes, they’re fun after you’ve gone home and want to just thwip about the apartment. Allegedly, the Spider-Man and Ghost-Spider add-ons arm you with an “electroweb,” so you might be seeing something different than the person next to you. Iron Man and Rescue add-ons give you repulsor rays. But whether you have a toy with you or not, the game play is the same — a bit of a work-out, but fun. Podcast guest Jason Salazar tells me they’re just repainted versions of the Playmation toys, but as I never bought those, I can only take his word for it.

But when you go outside, and realize the spider-bots are still lurking, it doesn’t hurt to have a webshooter on hand. 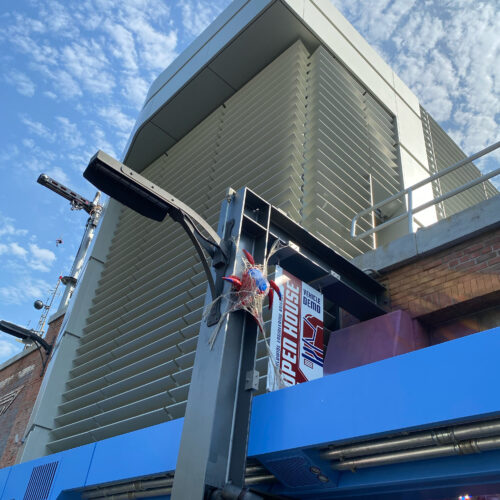