Superman & Lois isn’t just the best CW superhero show, this is the best version of Superman we’ve seen in years. In the aftermath of “Crisis on Infinite Earths,” this series resets what the Arrowverse had told us about Tyler Hoechlin’s Man of Steel. Despite implications that he would be part of a new Justice League along with his cousin Kara, Lois Lane (Elizabeth Tulloch) and Clark Kent went to Smallville to tackle the greatest challenge of them all: raising twin boys. But of course a threat to the world has arisen and… this may be another Earth in the multiverse, and Hoechlin may be a different Superman than he was before. No matter what reality, no matter what continuity, the actor gets it, and is allowed to be it. He may be the best Superman since Christopher Reeve.

It’s not a setting that Superman fans are familiar with from comics, except for dim memories of “Imaginary Stories” in the 1960s. But that adds a fresh layer to this. The production isn’t rehashing familiar Superman storylines; Supergirl took most of those anyway. They even found a new twist to Morgan Edge. It may not be the Superman you know, but it is a Superman you’ll love.

The same can be said for Lois Lane. Tulloch follows in the footsteps of many strong actors playing Lois and makes the role her own. You’ll believe a man can fly and then fall for this intrepid reporter. The below announcement includes the news that Superman & Lois will be streaming on HBO Max in August, following a brief 5-episode appearance on the service a couple of months ago. It makes sense. But I think I’d like to have this on my shelf as a series to enjoy again along with behind-the-scenes extras.

Superman saves the world, and saves his family when Superman & Lois: The Complete First Season releases on Blu-ray and DVD on October 19, 2021 from Warner Bros. Home Entertainment. Featuring never-before-seen extended versions of all 15 action-packed episodes from the first season, plus bonus features, Superman & Lois: The Complete First Seasonis priced to own at $24.98 SRP for the DVD ($29.98 in Canada) and $29.98 SRP for the Blu-ray ($39.99 in Canada), which includes a Digital Copy (U.S. only). Superman & Lois: The Complete First Season is also available to own on Digital via purchase from digital retailers and to stream exclusively on HBO Max starting August 20, 2021.
After years of facing super-villains, monsters, and alien invaders intent on wiping out the human race, one of the world’s greatest super heroes (Tyler Hoechlin) and comic books’ most famous journalist (Elizabeth Tulloch) come face to face with one of their greatest challenges ever – dealing with all the stress, pressures and complexities that come with being working parents!
With Blu-ray’s unsurpassed picture and sound, Superman & Lois: The Complete First Season Blu-ray release will include 1080p Full HD Video with DTS-HD Master Audio for English 5.1. Featuring all 15 episodes from the first season in high definition, as well as a digital code of the season (available in the U.S. only).
Superman & Lois stars Tyler Hoechlin (Supergirl, Arrow), Elizabeth Tulloch (Supergirl, Grimm), Jordan Elsass (Little Fires Everywhere), Alex Garfin (New Amsterdam), Erik Valdez (Graceland), Inde Navarrette (13 Reasons Why), Wolé Parks (All American), Adam Rayner (Tyrant), with Dylan Walsh (Blue Bloods), and Emmanuelle Chriqui (Entourage). Based on the DC characters, and Superman created by Jerry Siegel and Joe Shuster, the series was developed by Greg Berlanti (Arrow, The Flash, Batwoman, Supergirl) and Todd Helbing (The Flash, Black Sails), who executive produce alongside Sarah Schechter (All American, Riverdale), Geoff Johns (Titans, DC’s Stargirl, Wonder Woman) and David Madden (Kung Fu, Save the Last Dance). 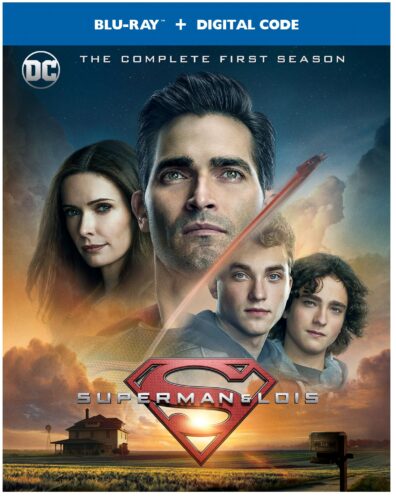