After watching The Incredible Hulk, I resigned myself to all the Marvel movies being one long epic story, with each “episode” focusing on different characters. It’s a comic book storytelling trope which seems a no-brainer for movies, yet it also has huge risks. Each individual chapter should still be able to stand on its own though enticing moviegoers to get the next issue.

While Iron Man 2 may not have quite hit the mark there, its box office proves that audiences are ready to commit to the Marvel Universe. Most won’t walk out geeking out and speculating about what every clue means. Sorry, people, but I’m still betting that the post-credits tag that caused me to give a whoop of joy would cause headscratching among 70 or 80 percent of the audience – if they hadn’t already left as soon as the AC/DC music swelled.

However, this piece is for those who joined me in that whooping. For you, my fanboy brothers and sisters, I want to talk about where this might all be going. I could be 100% wrong. I probably am. But I want to start a geeky discussion, right here, right now, and hope to high heaven that someday I’ll get to do the same thing about the onscreen DC Universe.

If you haven’t yet seen Iron Man 2, just bookmark this page and come back later. There might be SPOILERS AHEAD!

Nick Fury: Aside from signing a nine-picture contract and having a life’s goal of beating Nicolas Cage at wedging himself into every modern mythos possible (see: Star Wars, Astro Boy), Samuel L. Jackson has said that The Avengers will really be his movie. Actually, I’d rather see Nick Fury have a solo outing, or perhaps do something along the lines of Brian Michael Bendis’ Secret War, doing something really, well, secret with the superheroes. An Avengers movie needs to be big, loud and very very public.

What we get about Nick Fury in Iron Man 2 is that he’s old, at least older than anyone thinks. He knew Howard Stark (John Slattery) very well, and reveals that the Stark pater familias was one of the founders of SHIELD, an organization, by the way, that almost nobody knows about. From newspaper clippings about Anton Vanko, father of Whiplash, we can place SHIELD’s origin at about roughly the same time that it happened in comic book history – in the mid-60’s at the height of the Bond craze.

To have had a friendship with Stark Senior, Fury had to have been already highly regarded, which means that he must have been some sort of war hero previously, as in the original Marvel Comics continuity. The Ultimate Marvel Universe, which introduced Nick Fury in the likeness of Jackson instead of David Hasselhoff, posits Fury as a super-soldier.

We haven’t yet seen Fury do anything overtly superpowered, but it makes sense. He’ll appear in Captain America, and we already know that a lot of that film will take place during World War II. Controversially, but firmly established, Marvel retconned a black super-soldier in the mini-series The Truth, the lone survivor of a program before Steve Rogers received the Super-Soldier formula.

They might not give him the name change – though let’s face it, Nick Fury does seem too perfectly a code name – but I’ll just lay money down now that Nick Fury is Isaiah Washington, without the later baggage they gave the character. 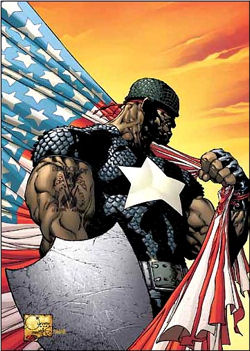 Captain America: In Iron Man, the shield sat on a bench in the background of Tony Stark’s workshop. Annoyingly, Iron Man 2 has to put a neon sign around that easter egg by having Agent Coulson (Clark Gregg) pick it up and ask incredulously, “do you know what this is?” The Marvel Movie Universe loses points on subtlety.

But the question does remain, what IS this doing here? Again, Director Jon Favreau spilled the beans that Howard Stark will be a character in Captain America, and if Tony has the shield, that means that Howard either made the original or was working on a way to improve it when Cap disappeared at the end of World War II.

From Iron Man 2, we also get that Howard Stark liked playing around with new elements and alloys, a subconscious influence, no doubt, upon his son’s life as Iron Man. Add that up with a SHIELD hotspot map that appears near the end of Iron Man 2, highlighting a small kingdom in Africa, and it’s no big leap for Marvel Zombies to guess that Howard was trying to work with Vibranium.

Yet my question is, why doesn’t Tony seem to recognize the significance of the shield? Is he just messing with Coulson (completely plausible)? Whether or not that’s the case, why would he be tinkering with it in its iconic form if the idea of being a superhero occurred after his capture in the Middle East? (The implication has been that the shield was on the workbench before he left on that fateful trip.)

Black Panther: Vibranium means Wakanda. Wakanda means T’Challa. Nobody has said anything about Wakanda yet, nor, apparently, is it clear if Marvel Studios retains the rights to the Black Panther, or if that got lumped in with the Fantastic Four package that Fox owns.

Black Widow: We know she’s there, even if they never name her. We know she’s a member of the Avengers, because Fury says she is. Will there be room for a Black Widow movie? It’s been off and on for years, and I wouldn’t be surprised if Scarlett Johansson’s husband Ryan Reynolds told her to grab on to a superhero franchise and hold on for dear life.

The Mighty Thor: Every time either Fury or Coulson appears in Iron Man 2, they make a reference to trouble in the American Southwest. In the tag, Coulson drives a car with New Mexico plates – “the Land of Enchantment.”

So much of what will happen in Kenneth Branagh’s film of Thor takes place at the same time as the events in Iron Man 2. Not surprisingly, the government would be covering up the sudden appearance of gods on Earth, so actually Tony Stark’s escapades with Whiplash and War Machine would be a welcome diversion for the public’s attention.

What does happen? We’ve seen a leaked image of the Destroyer armor standing in a desert setting (thanks to Latino Review for that). Obviously, the movie needs a big climactic battle, so that one’s a no-brainer. Though we know Branagh cast a lot of potential bad guys for the film – likely The Enchantress, Skurge the Executioner and of course, Loki – the Destroyer might just be important for an even bigger picture element. 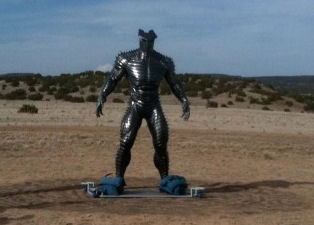 The Incredible Hulk: While Marvel doesn’t really need Edward Norton, it sure would be nice. The ending of his movie implied that Bruce Banner was gaining control over his monstrous alter ego, and maybe, just maybe, would be able to use his powers only for good. Or for his own selfish ends, which could also be a logical character arc – Favreau and Downey have no problem with Tony Stark being a twit, why wouldn’t Banner finally let loose?

We also know from Iron Man 2 and the tag of The Incredible Hulk that those two films take place at roughly the same time. Tony Stark is firmly an advisor to the Avengers Initiative when he approaches General Ross (William Hurt). Hmmm… this means it also all takes place at the same time as Thor…

This one’s a wild card, though, because although Norton is a fan, he’s somewhat cantankerous before his time. The Hulk was a founding member of the Avengers, but he’s still not really necessary to the whole thing in a time when anyone walking into a comics shop wouldn’t see him in the current line-up, or indeed any line-up for the past thirty years or so.

Hank Pym: Another wildcard, but talk has been heating up over Edgar Wright doing his proposed Ant-Man movie. No clues have been dropped at all about the character, but he’s a potential linchpin to my next supposition.

Jarvis: Tony Stark has built at least five fantastic war machines. Impressive, yes, but no one seems to have noticed that he’s conquered another frontier in robotics. He has an apparently sentient computer system called Jarvis that attends to his every intellectual whim and helps him fabricate his armor and create a new element.

Voiced by Paul Bettany, it’s possible but improbable that Jarvis is an actual human being. Another possibility is that he’s just an extension of Tony’s unconscious mind – I have to watchIron Man again, but in Iron Man 2 nobody but Tony ever hears Jarvis. While that would be a cool direction to explore in Iron Man 3, it’s still unlikely.

No, I’ll stick with Jarvis being an advanced artificial intelligence. He knows way too much, thinks way too independently – he actively questions Tony on the purpose of experiments – and is just a little too overtly subservient to be absolutely trustworthy.

In no version of Marvel continuity is Jarvis an artificial intelligence. However, the Avengers do happen to have an enemy that is.

If Marvel movies don’t introduce Hank Pym, a scientist almost as brilliant as Tony Stark, there’s still a logical combination of elements that would make this work.

Put Jarvis in the shell of the Destroyer, perhaps at the manipulation of Loki, and you have an incredibly powerful combination of mystical might and technological know-how, the kind of foe that requires the same sort of combination of heroes.

In short, you have Ultron. 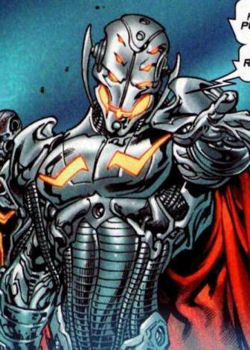 Not a whisper has been breathed in this direction, but it’s an easy leap to make, stitching the various movies together in a completely unexpected way. I’m not saying this is where they’re going, but I am saying…