A year ago, Creative Light Entertainment flew Fanboy Planet down to Los Angeles for an on-set visit to their production of Jekyll. We spent time in the abandoned Linda Vista Hospital, watching as a modern-day Henry Jekyll (Matt Keeslar) turned his obsession with virtual reality into a very real monstrosity. The overall shooting schedule was somewhat quick, with three weeks for principal photography. Director Scott Zakarin captured what he wanted, though Keeslar returned for pick-ups a few months later, to tighten a few scenes and make sure that the actor did not get lost inside the special effects. As Zakarin told the Hollywood Reporter, he intended for Jekyll to be “…a genre film with the heart of an art film.”

Does that mean we’ll get another The Devil’s Backbone, or will we see another Blade: Trinity? So far, it seems we should have high hopes.

For the director (and CEO of Creative Light Entertainment), that meant that Jekyll had to be about heart. Last week, he reflected on the project which will see its premiere for potential distributors in March.

“Filmmaking, like any art form, is built on compromises,” he mused. “Ultimately, I had fun going in. The performances weren’t shortchanged, and that’s what it comes down to. It’s satisfying on a sci-fi level and a human level.” More importantly, though, “I think people are going to like it.”

It may seem like a while for Jekyll to be in post-production, but that’s because the small production company was making sure the film looked right. Special effects lead Mark Teague enthusiastically concurs. “I never knew the meaning of the word teamwork until I did the effects on Jekyll, because I worked with incredibly talented people. Scott pretty much gave us free reign to come up with concepts and effects and present them.” 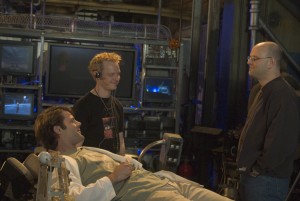 “We were like hound dogs,” he continues, “coming up with an idea and figuring out the program we needed. We’d do a series of tests and 80% of the time they worked, and Scott liked them. We just had three little Macintosh computers.”

As was once said, only the day that film becomes the cost of a pencil and paper will it become an artform. “That day has come,” Zakarin chuckles, but he takes little credit for it. He has nothing but praise for the special effects team, which includes Teague, Evan Unruh, editor Joe Vallero, and Sean C. Cunningham.

“We’re doing effects not possible for this budget even a year ago,” commented Zakarin, who also stepped away for a while to let his team really work. While they created Mister Hyde’s virtual world (and much, much more), Zakarin oversaw the launching of the successful “The Fishbowl,” the interactive online community devoted to reality television, as well as its sister community “The Fandom, dedicated to, well, many of the things that Fanboy Planet holds near and dear. For both sites, Zakarin hosts a weekly internet radio show called “What’s Hot” with co-host and longtime Creative Light guru Rich Tackenberg. 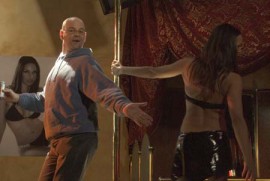 But as their March due date approaches, Zakarin returns to Jekyll with refreshed eyes. “As it draws near, I’m getting more excited about it. We’re moments away from locking the cut,” he enthuses. The effects work is “…98% done.” What really remains, according to Zakarin, is just reserving the right to tinker with it for right now. Unruh works closely with color correction in-house, to continue delineating the feeling between Jekyll and Hyde. All of Hyde’s shots have been done with a handheld documentary style, which Unruh will be desaturating to increase the intensity. On the flip side, the Jekyll scenes, shot more traditionally, need to have a richer, more luxurious look. While most of the work so far has been done in-house, Creative Light went out for the sound mix, finding Steve McCarty to do the audio post-production that will encompass a score by James Claytor and the sound design of Robert Kubilos.

What will Creative Light do next? Zakarin still hasn’t made a final decision, but he does know that whatever it is, it will involve the internet. Ideally, he will be online the whole time, allowing the audience to interact with the production.

“It’s all about, for lack of a better way of saying it, keeping it real,” he says earnestly. “I want to make movies that make sense for the audience that I’m speaking to.”