As good as Gal Gadot is, for a couple of generations, there’s only one Wonder Woman: Lynda Carter. Her theme song sticks in people’s heads, even if the words sometimes get a little jumbled. We all know at least “Get us out from under, Wonder Womannnnnn…” (And I really hope that plays somewhere in Wonder Woman 1984.) Carter’s spinning transformation quickly became iconic, and people still recognize it, even if they didn’t watch the series.

For three seasons on two networks, there was only one Wonder Woman. There was even only one actor playing Steve Trevor, though Lyle Waggoner played identical father and son with the same name. (There was an earlier Wonder Woman TV movie, starring Cathy Lee Crosby and Ricardo Montalban, but it was… different.)

Confused? Don’t be. You may have caught Wonder Woman in re-runs, or if you’re a DC Universe subscriber, enjoyed it there. And now Warner Bros. Home Entertainment has the complete series coming on blu-ray July 28, 2020, so you can sort it all out on your own time, with full enjoyment. It has a few extras, though unfortunately Carter only adds commentary to the pilot and one episode. Still, it’s a fondly remembered series (which spawned the recent DC comic Wonder Woman ’77). Some episodes are still fun, especially those with Diana’s younger sister Drusilla, the screen debut of Debra Winger. I look forward to the deep dive, like Diana diving off of the cliffs of Paradise Island into the ocean.

Check out the full information below:

Save the world? That’s a man’s job. Then along comes star-spangled Wonder Woman with her bullet-deflecting bracelets and golden lariat to set everyone straight. With Lynda Carter staring as the title character, Season One features adventures in Wonder Woman’s original World War II era, while Seasons Two and Three whoosh forward to the disco-loving ‘70s. Times change. The need to smash evil, calamity and injustice does not. 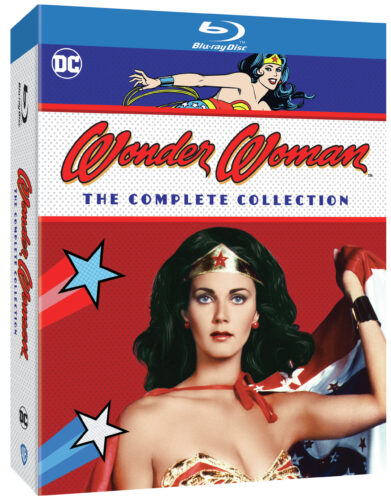 Fanboy Planet is an Amazon affiliate. Any purchases made through Amazon links may generate revenue for the site.