Zack Snyder returns to where he started in feature filmmaking, with humans vs. the undead. However, you can already see some differences from his past decade or so of work: there’s a brighter color palette, it looks breezy and fun, and Army of the Dead is an IP of his own creation (assuming that anybody can corner their own spin on zombies).

That last one is key to why fans should embrace this on its own terms. Snyder came up with the idea and isn’t going to break anybody else’s toys. (With Netflix, he already has two prequels lined up, one animated and one live-action.) He’s giving Dave Bautista the chance to anchor an action franchise without messing with his base persona. We may have fun with Army of the Dead, but it’s action with occasional jokes, hopefully not all provided by Tig Notaro, though her presence makes this film at least 10% more interesting ahead of time. (Seriously, let’s update Doc Savage and put Notaro in as Long Tom Roberts. Don’t say anything about it; just do it.) 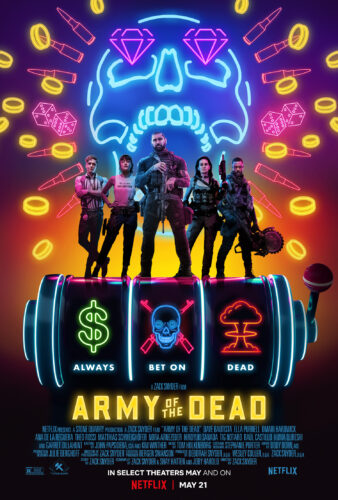 Here’s the trailer — and get ready to face the army of the dead on May 21.