Fanboy Planet’s luminary, Derek McCaw, asked me to write up my super Star Wars nerd fanboi reaction/speculation/etc for this morning’s latest attempt to break the internet (no longer capitalized), the “first” teaser trailer for Rogue One: A Star Wars Story (Rouge One is a totally different thing… That exists… Kinda). 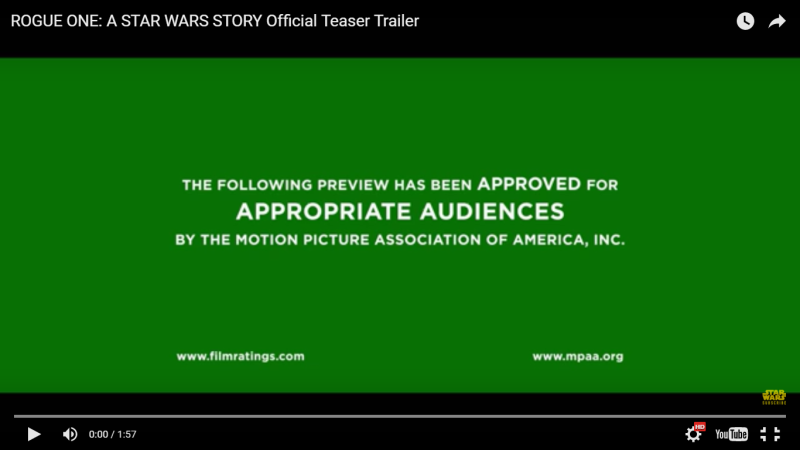 I think director Gareth Edwards made a bold choice starting off the teaser with unfinished green screen footage… Wait, what? Nevermind. (Honestly though, was I asleep when the MPAA card changed to “Appropriate Audiences”? Who decides who an appropriate audience is)?

Our first look at Rogue One’s protagonist, Jyn Erso (Felicity Jones – The Theory of Everything) (I refuse to acknowledge The Amazing Spider-Man 2 exists). Right off the bat we see the familiar uniform of a rebel soldier as seen in A New Hope. Awesome.

Okay, our real first look at Jyn Erso. Is she in handcuffs? Uh oh. Jyn, what did you do?

We don’t know that this is Massassi Base, but c’mon. It’s Massassi Base. I’m always delighted to see a power droid. (The Rebellion sure loves vests).

Mon freaking Mothma. (Genevieve O’Reilly – Revenge of the Sith, no, really. Look it up). She looks and sounds amazing. There are already people whining online that she’s too young to be Caroline Blakiston in a few years, but hey… Leadership is Hell. Look what happened to Obama in seven years: If you needed more evidence that this is Massassi Base: 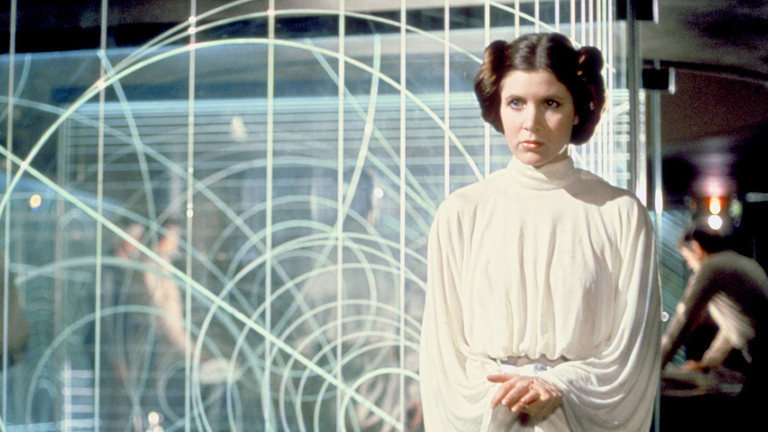 Diego Luna (Elysium) as a yet unnamed rebel. There’s a great theory out there (that I can’t take credit for as much as I’d like to) that Diego is playing Biggs Darklighter. 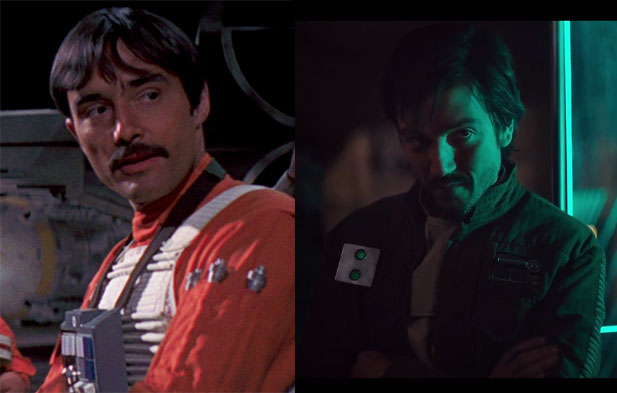 Seriously, how fantastic would that be? Biggs got a little love back in 1997 when he was added back into a cut scene in the Star Wars Special Edition, which certainly helped explain why Luke cares so much when the man with the ‘stache takes a header into the side of the Death Star, but having an entire movie to get to know and love Biggs would really add to the gut punch during the Battle of Yavin.

“Not Without My Bothan”

I think it’s interesting that so many folks out there are complaining that there aren’t many Bothans dying in this film. (Hint: The Bothan spies got the blueprints to Death Star II).

We see the blue(ish) droid a couple more times in this teaser. I suspect this is the character played by Alan Tudyk (Firefly – yes, I know I didn’t need to tell you that).

It’s no wonder the Empire lost when stormtroopers are just sitting around like that. They really take their tea time seriously.

Are there no municipalities in Star Wars that can keep their streets clean?!?

More kick-ass stormtrooper ass-kicking. Is it just me or does the city in the background look like some of the concept art for Disney’s Star Wars Land expansion? They’ve already said it’s modeled after a “new” planet. Hmm. Speculation.

Boom! Between The Force Awakens and Rogue One, we’re learning to love remote detonation.

If Jyn is there… Who pressed the button? Was it you? It wasn’t me.

Folks are making fun of the way Felicity says “rebel” here. “Rebhehl”. I like it…

…so does Mon Mothma.

I just hate it when upstart little indie studios get all fancy with their logos.

Gareth Edwards’ tribute to Cyndi Lauper. (This ride is too bumpy for repulsorlifts. Could she be in an actual ground vehicle? In Star Wars)?

Looks to be a good old Imperial-class Star Destroyer with some extra greeblies from DISH Network on top. It’s really nice to see the “old” stuff again.

That’s one massive shadow… What could it be?

Ah! The Death Star is getting its contact lens back. I can’t fathom the engineering here. It just seems to me that it would’ve been easier to build the dish in place. Oh, wait – They did. 20ish years prior:

Maybe they needed to change the oil.

I haven’t seen much speculation on Alistair Petrie’s (Rush) character (probably because I’ve been busy writing this thinkpiece instead of reading everyone else’s), but I’m going to guess he’s a “new” character – doesn’t fit Jan Dodonna or Carlist Rieekan.

Seriously, honey, can I get ONE glowy acrylic wall?

This shot just screams “Star Wars” to me. Everything is spot-on. The costuming is phenomenal. I can’t wait to see Jyn Erso cosplayers. (And I need Biggs’ jacket). (He’s Biggs to me)!

Okay, time to get deep into the geeky. We’ve seen this uniform before, on Colonel Wulf Yularen of the Imperial Security Bureau (which was spun off of COMPNOR). This isn’t Yularen, and nor is he Grand Moff Tarkin as some have suggested. I think we’re seeing Ben Mendelsohn (The Dark Knight Rises) as a new ISB officer tasked with retrieving the stolen Death Star plans before Darth Vader gets personally involved.

Another ground vehicle! This time with some fancy new stormtrooper pilots. Looks like they caught some naughty rebels.

Our very first look at Ghost Dog: Way of the Jedi (Forest Whitaker – Battlefield Earth) (Yeah, I went there).

There’d been several rumors that Rogue One would feature shadowtroopers, which have always just been stormtroopers in black armor (which I always found silly). Well, the rumors were apparently true. Personally, I’m not sold on the redesign here (nor am I sold on the redesign of the stormtrooper tank drivers a couple of images up). It seems every movie franchise for the past 30 years feels the need to completely redesign everything for each movie (Star Trek’s uniforms change every film, everyone’s shiny leather changed from The Matrix to The Matrix Reloaded, etc). Just leave well-enough alone. 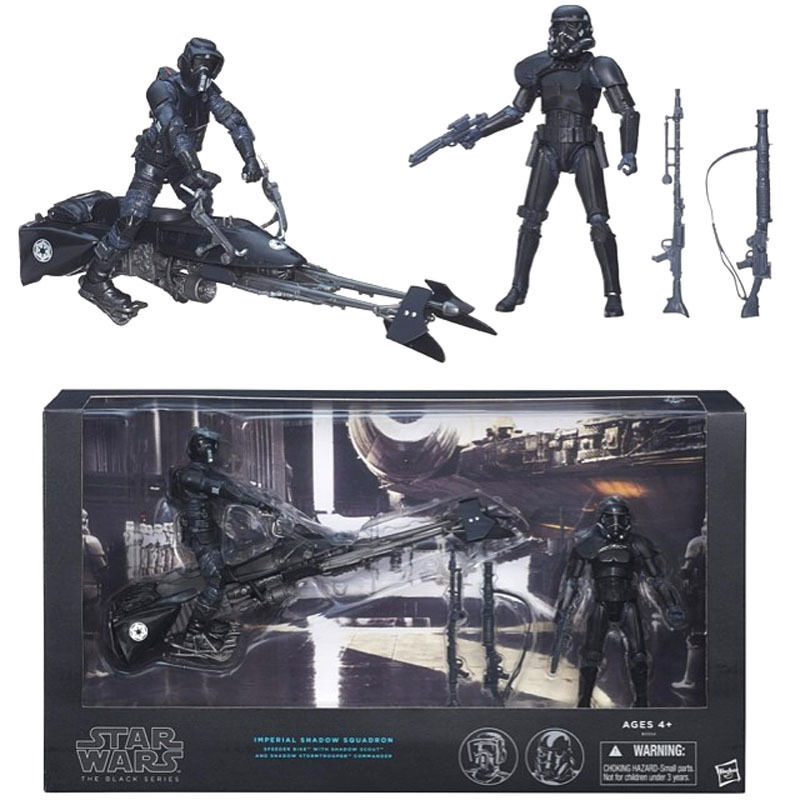 Then again, Hasbro gets to sell a new shadowtrooper figure.

Okay, but where are the non-humans in this teaser? Seriously, this is Star Wars. I want to see some aliens.

Here’s Alan Tudyk’s (I’m assuming) droid running with Jyn to catch the 5:15 uptown. (Londoners have already pointed out this is a known tube station: The Jubilee Line).

These stormtroopers don’t want to miss the train either. It’s a little hard to tell, but I don’t think the yellow armored figures are scout troopers, maybe the local planetary militia? Maybe another needless stormtrooper design?

Donnie Yen ( Ip Man), definitely not a Jedi, about to lay the smack-down to a bunch of stormtroopers who don’t realize that a good blaster at your side trumps a stick.

“Damnit, where’s the safety on this thing”?

A better look at the new shadowtrooper armor. Definitely SpecForces, just look at their weird blasters.

Big transport go boom. Looks to me like a design tie-in to Kylo Ren’s shuttle in The Force Awakens.

Those graphics in Star Wars Battlefront really are amazing, aren’t they?

Could this be the same ISB agent we saw aboard the Death Star? Probably. His hair looks darker here due to the silhouette effect. He is obviously not, as some have theorized, walking on water.

Vader doesn’t have a hood, but it doesn’t look like Palpatine either. The inclusion of the Emperor’s Royal Guard is intriguing though. And the device in the center of the room looks like a combination bacta tank/carbon freezing chamber. Yeah, I have no idea what’s happening here, but it’s awesome.

Feel free to correct me, but I believe this is Wen Jiang (The Lost Bladesman), who plays an un-named rebel (originally featured in the cast photo shown a year ago).

Someone on Reddit pointed out that three AT-AT’s seriously messed up Echo Base on Hoth. What are four of the beasts going to do to a few soldiers on the ground?

Here again, we see redesign for the sake of redesign. These aren’t the same AT-AT’s we saw on Hoth, nor are they the same “early” AT-AT’s we saw in Star Wars Rebels. The Empire is going to have to do some major redesign in the next 4-5 years (movie time) to get to the AT-AT’s we are familiar with.

Jyn Erso wearing what appears to be a TIE Fighter pilot uniform, complete with sticks for fighting blaster-carrying stormtroopers. Is she using the uniform as a disguise? Is she another traitor to the Empire like FN-2187 will become to the First Order? Is she a double-agent trying to work her way into the Rebellion?

When the title was announced, the general consensus seemed to be that this would be a movie about Rogue Squadron, and maybe there is a connection somehow, but it seems less and less likely.

I’m still not sold on “A Star Wars Story”. I actually liked the “Anthology” tag, but it makes sense that they need to differentiate between this and the “Episode” movies.

Drew has been acting for over 30 years, cutting his performance teeth as a "Siamese Child" in a local high school production of The King & I in his hometown of Mequon, Wisconsin. After performing steadily in Wisconsin, Drew moved to San Jose, California in the mid-90's and has enjoyed roles both on and off stage with several theatre companies including Shady Shakespeare (now Silicon Valley Shakespeare), Northside Theatre Company, City Lights Theatre Company, and others. In 1997, Drew's first written work, Star Wars - Cynabar's Fantastic Technology: Droids (co-written by Eric Trautmann), was published by West End Games. Drew went on to contribute to multiple products in the line. Drew has appeared in several web series (The Uploaders, Donovan & Simms, Crackpot Comics) and short films (The Evolution of a Gamer, The Zach who Saved Christmas).