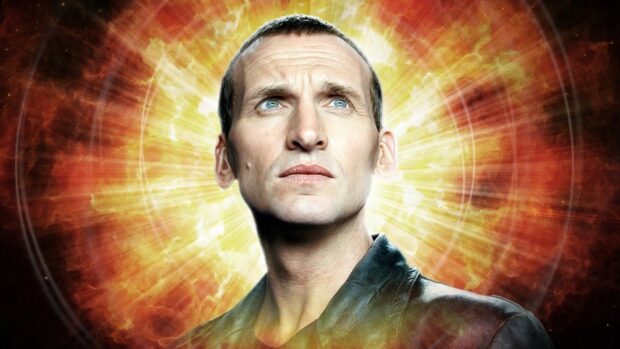 Christopher Eccleston, the actor who brought Doctor Who back to life on television and left after one series, will return to the role for a series of adventures for Big Finish Audio — beginning in May 2021 with the first of four boxed sets of three episodes each.

Honestly, I keep checking the date to make sure we didn’t all travel to an endless April 1, but BBC Studios reports that it’s true. Though in the past couple of years Eccleston had softened and come to embrace his fandom, his exit from the series had been contentious. As recently as Gallifrey One in February, he had expressed that while he appreciated everyone wanting him back, he didn’t want to revisit the role. However, on the Big Finish site, they’ve included a quote from Eccleston: “After 15 years it will be exciting to revisit the Ninth Doctor’s world, bringing back to life a character I love playing.”

But let’s turn to that Gallifrey One, his first appearance there, where he was met with overwhelming affection. (I’m not exaggerating there.) The last day of the convention was his birthday, and when he stepped out on stage, the entire audience spontaneously stood and sang Happy Birthday to him. He thanked everyone for the love. Maybe fandom got to him. Or maybe it was Big Finish co-founder and chairman Jason Haigh-Ellery.

The audience sings #happy birthday to @christophereccleston at Sunday morning’s panel at #gally1. Take that love back with you, sir, and again, thank you for being here.

In the BBC article, Haigh-Ellery comments, “I first talked to Christopher about returning to the role of the Doctor at a fan convention in February this year. Christopher said he was enjoying meeting the fans and was pleased that his Doctor was remembered so fondly. I am so pleased that Christopher has decided to return to the role with us – and I’m excited to welcome him to the Big Finish family as we discover the new adventures of the Ninth Doctor.”

And that was after a Big Finish panel in which Haigh-Ellery had admitted that Eccleston had been cool to the idea when fans asked.  UPDATE: Gallifrey One agrees with us.

We think the moment Chris Eccleston changed his mind at #gally1 2020 was taking the stage Sunday morning and being hit with the entire room singing Happy Birthday to him. To our attendees: thanks. To the rest of the fan world, you’re welcome. 🙂

Let’s be honest — what Big Finish has been able to do with the “New Who” has been high quality, especially when the original actors agree to return. John Hurt and Derek Jacobi both reprised their roles as “The War Doctor” and “The War Master,” respectively, in two separate series of adventures. Recently, Sir Michael Palin performed a Torchwood adventure. And David Tennant will be teaming with Tom Baker for an audio series, as well as with Paul McGann for part of the Time Lord Victorious event.

It also helped that Big Finish Creative Director Nicholas Briggs began his association with the Doctor by voicing the Dalek in the Eccleston episode “Dalek.” Briggs enthused, “Working with Chris was a very special time for me. The beginning of my Doctor Who TV career. So, writing for and directing him feels incredibly exciting. He’s such a powerful performer and it’ll be amazing to work with him again.”

On stage and in his recent memoir, I Love the Bones of You, Eccleston has emphasized that he focuses on quality work and that starts with quality writing. Clearly, he’s found both with Big Finish. Pre-orders are available now.

Fanboy Planet has no affiliation with Big Finish Productions, other than as fans. We are affiliated with Amazon, and any purchases made through Amazon links on this site may generate revenue for Fanboy Planet.