It was an uncharacteristically chilly day for San Jose yesterday, as press and Cinequest supporters gathered on a patio at San Jose State. We chatted and noshed on meatballs, happy to be in one place again — film fans and writers, eager to find out what was coming to Cinequest 2017.

And there were a few surprises — not just new venues since Camera 12 had unfortunately closed, but a whole new city added to the line-up. It’s still a San Jose-based festival, but Cinequest is expanding up the peninsula… and into Virtual Reality…

Cinequest Film and VR Festival (Cinequest 2017) will occur February 28th to March 12th in bastion San Jose, while expanding to Redwood City, California. Festival screenings and events have grown from 365 in 2016 to 504 in 2017. Heightening its fusion of technological innovation with empowering creativity, Silicon Valley’s Cinequest will introduce an unparalleled Virtual Reality element to the 2017 festival. Cinequest 2017 highlights include:

This year’s two recipients are:

Actor, Jane Lynch (Glee, Best In Show, A Mighty Wind, The 40-Year-Old Virgin ). Emmy award and Golden Globe winner, Maverick Spirit Award honoree Jane Lynch brings her very special presence to every project with which she’s involved. Multi-talented, statuesque, and undeniably charismatic, when she’s on screen, be it big or small, it’s impossible to take your eyes off her. A conversation with Jane Lynch and award presentation will precede the screening of her delightful new comedy, Writer’s Block, on Saturday, March 11, at 4:15 pm, California Theatre.

Producer-Writer-Director, Jason Reitman (Thank You For Smoking, Juno, Up In The Air ). Early in his career, Jason Reitman established an amazingly simple credo: “I don’t want to make films that give you the answer. If there is a message to my films-and I hope there isn’t-it’s to be open-minded.” His screenplays and direction are masterful examples of subtle poignancy. A conversation with Jason Reitman (and award presentation) will occur as part of Cinequest’s Writers Celebration on Sunday, March 5, at 1:30 pm, Hammer Theatre.

New Redwood City Venues Added to Magnificent San Jose Theatres : Cinequest’s Board and Founders are proud to announce increasing the festival’s San Jose presence and services by increased utilization of the spectacular California and Hammer Theatres, as well as adding screenings and events at Cinemark Santana Row, Fairmont San Jose, San Jose Stage Company, and Uchida Hall on the San Jose State campus. Further increasing our screening venues, Cinequest is expanding to the gorgeous, state of the art Cinemark Century 20 in Redwood City. 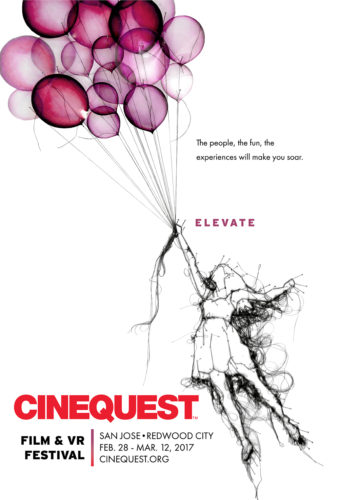 We’ll have much more coverage coming… in the meantime, start making your plans to attend!