Yesterday at WonderCon in Los Angeles, DC Comics orchestrated a fantastic announcement panel that unveiled some of the books coming our way in May and June. They’re not really starting over with “Rebirth,” and they kept reminding us of that fact. But come on, Dan DiDio and Jim Lee, you can’t blame us for being skeptical.

Case in point that it’s not starting over, however, is Action Comics. Reverting to its original numbering (if there hadn’t been a new #1 with “The New 52”), it also reverts, sort of, to a version of Superman that people have loved and been loving in their post-Convergence title, Superman: Lois and Clark. Really, re-reading that sentence made my head hurt and I understand the continuity. So they have an uphill battle to fight with perception.

In Superman: Lois and Clark, written by Dan Jurgens (one of the masterminds of Zero Hour and The Death of Superman), an alternate universe Superman (or rather, more like 1990s Superman) is married to Lois Lane, they have a son, and they’re trying to keep a low-profile on Earth Prime where a younger, red trunk-less Superman fights for Truth, Justice, and the American Way. As part of the Rebirth event, their adventures switch to Action, still written by Dan Jurgens with art by Patrick Zircher, Tyler Kirkham, and Steven Segovia. If you’re already enjoying Superman: Lois and Clark, there’s no reason to believe placing this in Action Comics will change anything. It might cause a few more people to pick up a book that by many accounts is satisfying to those who long for the way things were. 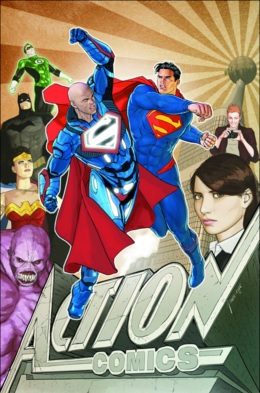