With the impending absorption of 20th Century Fox by Disney, everybody wants to know who has the rights to which Marvel characters. Luckily, a few years ago Maurice Mitchell of The Geek Twins put together a handy dandy chart which he has updated this past week to make it clear. Or as clear as anyone has made it this month. Based on public statements and inferences from said statements, most characters’ places are clear. Though no one has been really specific about Namor the Sub-Mariner, it’s likely he’s still with Universal Studios, and with DC Films releasing Aquaman next Christmas, it’s doubtful Kevin Feige is anxious to do the Marvel take on Atlantis. 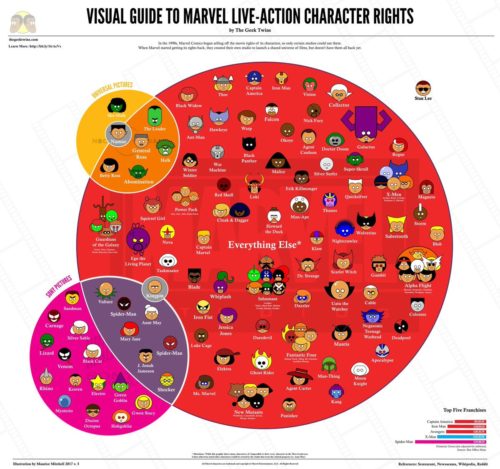 Where it gets confusing is in the sub-universes of Spider-Man and the Hulk. Sony Pictures and Marvel Studios currently have a deal that allows several Spider-Man characters to appear in the regular Marvel Cinematic Universe, with a quid pro quo of the Marvel Cinematic Universe appearing in Sony’s Spider-Man movies. As you can see from the graphic, however, they still have a lot of other characters, such as Venom, that Sony is free and determined to produce their own movies about. Those may still interact with Tom Holland’s version of Spider-Man, but it’s doubtful that Venom will show up at the end of Avengers: Infinity War to push Wolverine aside and punch Thanos.

Then there’s the Hulk: Universal Studios owns the rights to distribute Hulk solo movies, as they took the initial risks on the television series starring Bill Bixby and Lou Ferrigno, the Ang Lee Hulk, and the Louis Leterrier The Incredible Hulk. You may notice the Hulk is extremely popular in the Marvel Cinematic Universe, but we still have never seen a Rampaging Hulk. For now, he’ll only be in ensemble films from Marvel Studios — it’s unclear if the Totally Awesome Hulk is also part of the deal with Universal.

On the other hand, don’t we have enough?