At the beginning of April 2021, a billboard popped up on Sunset Boulevard. “Bring Back Tony Stark!” Some fans just didn’t want to accept that a cinematic hero, whose adventures we followed for a decade, would die at the end. But Tony Stark, as played by Robert Downey, Jr., was always fated to die. It just didn’t happen the way various writers and directors had laid the clues that it would.

You can’t blame these fans. In comics, almost no hero stays dead. The line used to be “how dead is the character? Bucky dead,” until Ed Brubaker and Michael Lark retconned that death, giving us The Winter Soldier. And from Tony Stark’s origin as Iron Man, Death breathed down his neck more than any other character than Thanos. He was always on the edge, with his heart kept beating by his armor. The only Marvel Comics superhero now that we can point to as permanently dead (though he’s popped up a couple of times outside his natural timeline) is Captain Mar-Vell of the Kree, who famously died in Marvel’s first official Graphic Novel, The Death of Captain Marvel.

In that story, it was revealed that a battle years in the past had exposed Mar-Vell to carcinogenic vapor, and no matter how hard he fought against evil (and Thanos), cancer was the one enemy he could not defeat. It’s a beautiful story written and drawn by Jim Starlin, made all the more powerful by its refusal to cheat even in the fantastic setting of the Marvel Universe. Mar-Vell had incurable cancer, and then he died.

For the Marvel Cinematic Universe, Mar-Vell was recast and reimagined as Annette Bening, because by 2018, few movie fans would have any idea there had been a Captain Marvel in the comics before Carol Danvers. And besides, that tragic arc was already being lined up as the fate of one Tony Stark.

No, it didn’t actually happen that way. Tony almost had a happily ever after but sacrificed himself defeating Thanos instead. It was triumphant. It was redemptive. And he had come so close to it many times before. 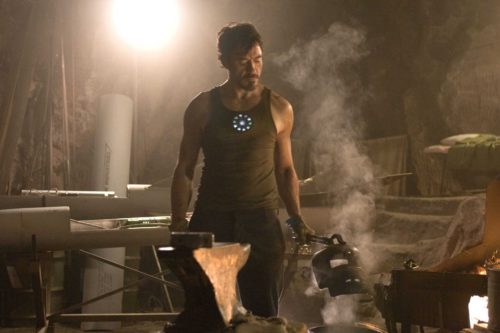 Take the first Iron Man. Yes, like the comics, he’s basically an arms dealer who never thought about the consequences of his inventions, spending most of his time as a billionaire playboy. Babes, booze, and bombs would be his unofficial motto until the Ten Rings terrorist organization attacked and his heart was damaged in the process. That’s his first known brush with death, overcome by his cobbling together the prototype of the arc reactor which kept his heart beating and powered his greatest weapon – the Iron Man armor. By the end of that film, though people didn’t take it as a negative, his ego was healed and despite S.H.I.E.L.D.’s admonition, he had to take the credit and tell the world that Tony Stark was Iron Man.

(You may note that later in Marvel’s Avengers, Nick Fury doesn’t want Stark because he’s not a team player – a side note that plays into my belief there was a deep, sad interior subplot that never really burst through to the surface, and I’ll admit maybe was discarded.) 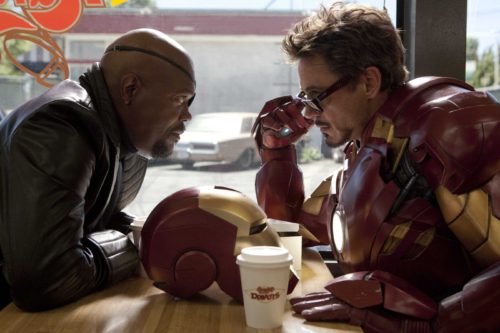 By the somewhat muddled Iron Man 2, the arc reactor has turned on Tony, slowly poisoning him. Rather than be honest and seek help, he falls further into the billionaire playboy behavior. Though the script never quite calls it out, we’re seeing a parallel to the comics started by the famous “Demon in a Bottle” arc created by David Michelenie and Bob Layton. Tony Stark is an alcoholic, an addict, and his arrogance keeps him from confronting his own self-destructive behavior. It’s also not a leap to say that the arc reactor has not so much poisoned him as caused cancer to germinate deep in his cells.

Through some hand-waving and an improved arc reactor, Tony bounces back and learns almost nothing from the experience. As far as he’s concerned, his brilliance allows him to continue to be a lovable train wreck. His money, his technology, and his mind will overcome any challenge. But the Avengers proved him wrong, and he had no tools to deal with it.

For the first time, Tony Stark sees there’s something bigger than himself – not the warm embrace of a team of superheroes, but the reality that we’re not alone in the universe, and whatever’s coming may be more powerful than we can handle. It’s fitting that later in Age of Ultron, Tony isn’t privy to the Vision (Paul Bettany) and Ultron (James Spader) having their final conversation that reveals yes, humanity can’t protect itself and will fade away; we just have to appreciate the moments we have now. Because that’s a lesson Tony can’t ever accept.

After finally being willing to sacrifice himself at the end of the first Avengers film, our next view of him is a man unable to handle the idea that he has PTSD. That’s in Iron Man 3, in which Tony’s seen as sort of starting to open up a bit except he keeps having these panic attacks and still a bit of an arrogant death wish. Why else would he challenge the ersatz Mandarin (Ben Kingsley) to attack him in his own home? He’s a man subconsciously grappling with the implications of his own mortality.

Tony gets stripped down to his basics, rebuilds, and at the end even has heart surgery so he’s not dependent on the arc reactor. It should be a happy ending, and were this not a larger narrative instead of a trilogy, it would have been – though with plenty of personality flaws still intact.

It’s in Age of Ultron that Tony’s next steps in the journey towards death begin. The malevolent A.I. that becomes Ultron is formed because Tony wants to make sure Earth is protected if he can’t do it himself. (But in a way that people would still think Tony Stark – and maybe Bruce Banner – saved the world again.) He’s always convinced he’s right; he doesn’t pause for self-reflection or brook counter arguments. If he did, the Ultron project wouldn’t have gotten so far. JARVIS could have just run a shield, perhaps.

Tony butts his way into Captain America’s initial trilogy, showing up in Captain America: Civil War and immediately siding with Thunderbolt Ross (William Hurt) on the Sokovia Accords. Superheroes shouldn’t interfere in political issues without government approval. Except that’s exactly what Tony Stark has done in every one of his appearances up until now.

And it’s in that argument that he has a key throwaway line, referring to a magnetic resonance headache. He gets them from time to time. It has no build up, and in the exciting fury of pitting Iron Man against Captain America while introducing Black Panther and Spider-Man, it’s never referenced again. But it’s clear: at least at some point, somebody in the room at Marvel Studios thought that Iron Man’s armor might just be killing him… again. 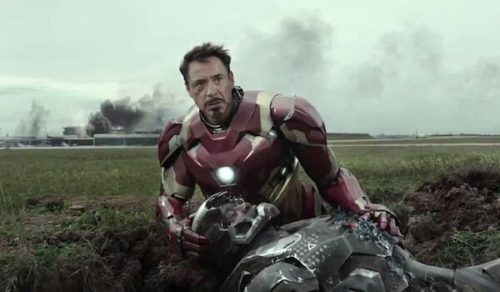 Tony never sees the error of his ways. He brings a 15-year-old kid into the fight with Captain America. In Spider-Man: Homecoming, he poorly parents Peter Parker (Tom Holland), angered and disappointed when the kid acts like a kid in his earnest attempts to make things better – which, really, had been the heart of Stark’s own daddy issues. Tony Stark is brilliant, but emotionally a child, passing along the cycle of emotional gameplaying started by his father Howard. When you’re powerful enough, even if you think you’re good, you don’t accept no for an answer.

(Any resemblance to current billionaire technological geniuses is purely coincidental unless you want to infer otherwise.)

At least by the end of Homecoming, Tony finally grows up enough to ask long-suffering Gal Friday Pepper Potts (Gwyneth Paltrow) to marry him and, unspoken, share what’s left of his life.

In Avengers: Infinity War, Tony fails spectacularly and tragically, marooned on an alien world after watching the characters co-created by Steve Ditko turn to dust. He does manage to get back to Earth in Endgame, and in that strangely structured film, after defeating Thanos but not really saving the day, Tony does the unthinkable for a superhero; he gives up. 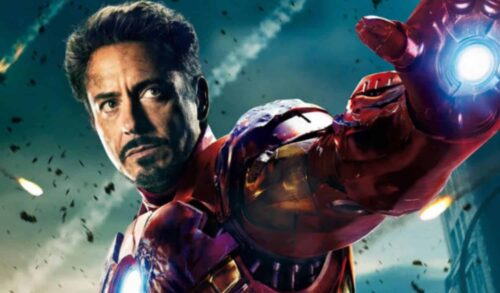 Oh, it’s presented otherwise. He fought hard. He’d given his time. But it’s also clear that in the intervening five years since “The Snap” that wiped out half of all life forms in the universe, the only other hero to “give up” was the extremely depressed Thor. (Even Hawkeye went rogue as Ronin.) Tony could deny his depression, perhaps, but he’d basically faced the only fate worse than death for him – failure – and so walked away.

Of course he returned. Of course he restored the status quo, but died in the process. Cancer didn’t take him, and was not mentioned in those Avengers films as a possibility at all. The Marvel Cinematic Universe instead chose to make something more mythic out of Tony, more resonant. The last sound effect we hear before the end titles of Avengers: Endgame is the sound of a hammer on an anvil. Yes, it’s from Iron Man, the sound of Tony forging the initial armor. And at his funeral, we’d seen the young boy he bonded with in Iron Man 3. But it really signals the coming, now confirmed by Marvel Studios head Kevin Feige, of Riri Williams, Ironheart. Tony’s influence now is more important than Tony Stark himself.

And ultimately, that’s the lesson he should have learned, and was learning in Endgame – the legacy is nothing if it’s not inspiring others to be more and do more. Back to that graphic novel, The Death of Captain Marvel. It ended tragically, sadly, and we all accepted it. Mar-Vell inspired many more – with at least three characters at Marvel using the name afterward. 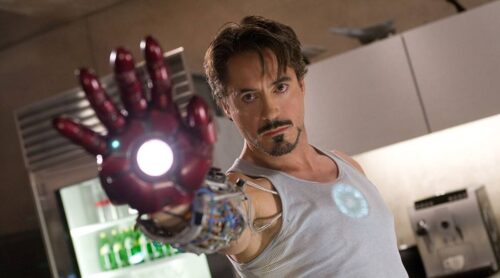 So bring back Tony Stark? No. He was fated to die. He had to die. (Clearly, the production team on What If –? agrees.) For the Marvel Cinematic Universe to have an impact on the culture in the way the comics no longer can, it has to face reality. We grow older. We try to lay the groundwork for the next generation to not just succeed us but exceed us. Once Tony Stark figured that out, his time was done. 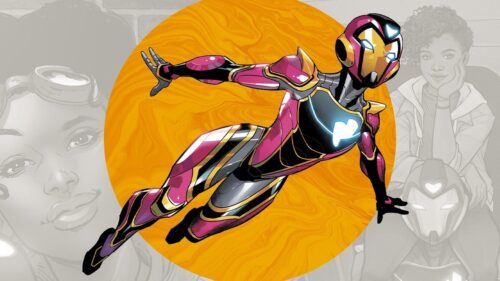 Fanboy Planet provides links to affiliated retailers, including Amazon. Purchases made through those links may generate a commission for us.