It is the last of the Fox-produced Marvel Mutant Movies. Rumor has it that director Josh Boone’s vision breathes new life and a new direction into the concept, the way that Deadpool did. And despite the first trailer being released three (!) years ago, The New Mutants has not made it to release.

To be fair to Disney, it was a hard sell after the debacle of Dark Phoenix. The release date kept getting pushed back even when Fox was its own studio. And everybody’s release slate is a mess as a result of COVID-19. So should it just go direct to video because some high-profile films are taking that route anyway? According to the Twitter/Instagram account “New Mutants Updates,” it appears that the film did briefly appear as a pre-order on Amazon in the US and UK, but has since been taken down.

And over the weekend, Cinefex Magazine released some pretty gorgeous screen shots that prove just how much the film owes to the original New Mutants by Chris Claremont and Bill Sienkewicz (the artist may also have created some new art for the end credits). Yes, the Demon Bear appears, though the main antagonists seem to be the Smiley Men. All of that is still speculation — we just want to see the movie, whether it be VOD or Hulu (probably too dark for Disney+).

Maybe this has all been one of the most incredible anti-publicity campaigns in film history. Well played, Mouse, well played. 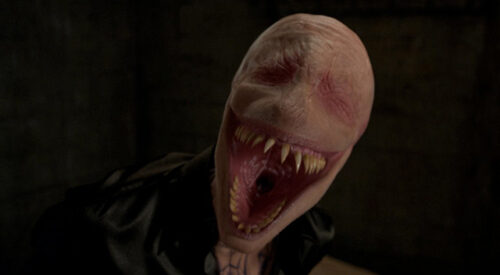